the woman became a doctor, but the girl became a writer

I met Georgiana at the biggest bookfairs in Bucharest in 2018, and she bought both volumes with an autograph. Little did I know that she was an active blogger and that she would become a huge fan of the series. She wrote one of the few English reviews based on the Romanian books, which I hope you enjoy as much as I did. It is by far the most detailed opinion on not only the first book, but of the Wallachian Universe as a whole.

You can find Gergiana on Facebook, where she runs multiple writing groups: Book reviews by Georgiana

Stay tunned! The English version of VLV 1 is in the professional editing phase!

I hope Georgiana’s review will convince you to place ”The Light of Trodheim” on your TBR for next year! 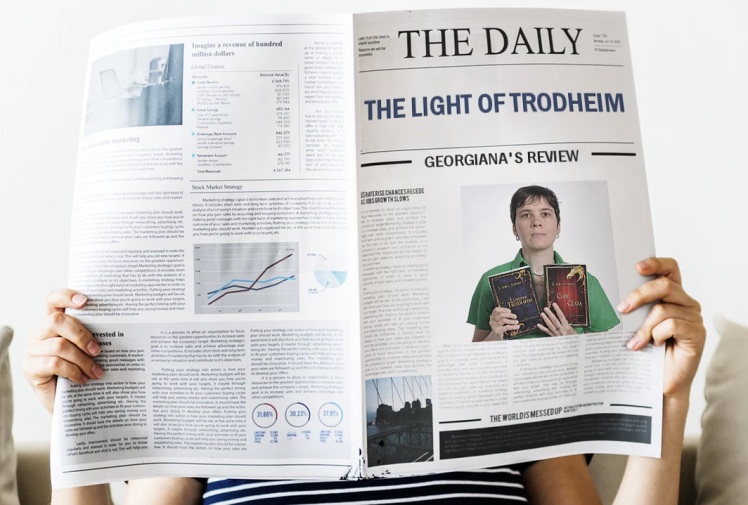 It’s the first book from “The Viscount of the Lost Verentia” written by Romanian author Laura Știrbu. The story focuses on ten-year-old Justinian Mojic’s adventures during his first year at one of the most prestigious school-fortresses in the United Wallachia, SanteVel and also on Lily Poison, a mysterious and rebellious senior. Things change when the news of a serial killer’s escape from the prison fortress Torun spreads throughout the land, while other events will make Justinian ask questions about himself and his past.

Laura Știrbu’s unique style consists in describing beautiful Romanian landscapes, thus inviting her readers to journey along her native country in which she added a pinch of mystery and fantasy. As we stroll along the United Wallachia, we may find Transylvanian influences (the school-fortresses from the mountains), Great Wallachia/ Wallachia-proper influences so as Dobrujan influences (e.g. Aquinox). The Romanian Educational System and the rules regarding the army and Police Academy were some of the writer’s sources of inspiration as the readers will notice in the Vel school-fortresses.

The novel is a fantasy with a mixture of the “Harry Potter” series by J. K. Rowling, “Game of Thrones” by George R. R. Martin and J. R. R. Tolkien’s “The Lord of the Rings” and “The Hobbit” because it contains a few elements from all the novels mentioned earlier. Magic and potions (Harry Potter), decorative weapons and the fight to succeed to the throne (Game of Thrones), magical creatures, especially dragons and special characters (The Lord of the Rings and The Hobbit). The talented author also teaches us about friendship, loyalty, courage, truth, virtues and sins, childhood (Justinian) and maturity (Lily), girl power (Lily, Madeline etc.), the conflict between religion and mythology and so on. Fantasy fans will get to discover all sorts of dragon species in Laura’s enchanting world.

Adventure, suspense, mystery and lots of dragons are the perfect words to describe this book.

Different things and events with a symbolic meaning are also present in the story. Things like: the raven (death), the sword (war), black and white (Yin and Yang), water (purity and higher wisdom) and tarot cards (specifically chosen by Madame Saprofira and Penelope Celestra) that will predict Justinian’s destiny.

The readers will learn about political and media manipulation, but also about the willpower which Justinian displays during the story. Laura makes references about the Coup d’état from 1989, the Great Union and other events from the Romanian History which you’ll discover on every page you read.

I recomend this book to readers 14+ since there are scenes which are a bit scary and can’t be understood by younger readers.